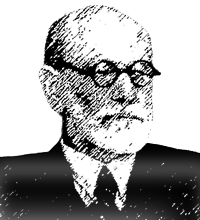 It’s been nearly a year now since I started Freud’s Butcher, and what a roller coaster ride it’s been! I’ll talk more about that in August, the actual one-year blogiversary. It’s just a fortuitous coincidence that these last few weeks have made me re-examine one of the blog’s basic premises, while reminding me why I started writing here.

My Mother’s Story — and She Stuck to It 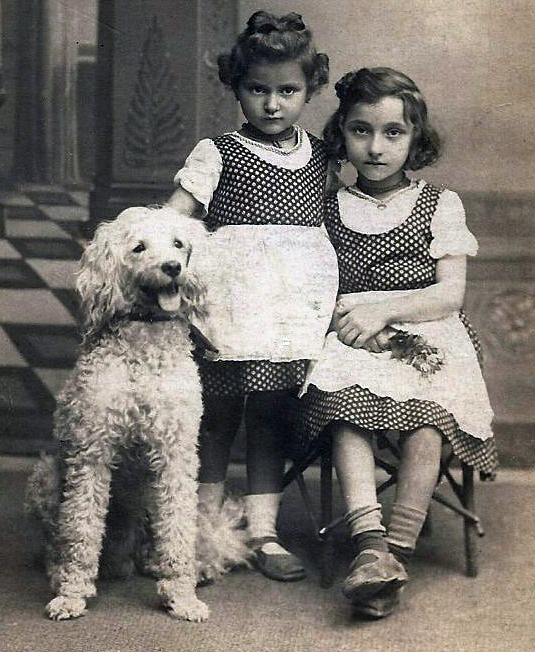 Flooki, my mother, and her cousin Stella Schmerling. You may have seen this before, but it’s my favorite and I would put it in every post if I had an excuse

One of the few family stories that I recall from my mother is that her cousin Stella Schmerling had been sent to see Dr. Freud in the hope that her limp would prove to be psychosomatic. It was such a striking story, in fact, that I made it a centerpiece of my ruminations about my family history.

I wrote on the Psychology page:

Stella had a limp of unknown origin, one that didn’t respond to physical treatment. Hoping that the condition was psychosomatic, Stella’s parents decided to seek out the talking cure for their daughter as a last resort.

This tale always led me to assume that Freud was considered a kind of faith healer in Vienna, only without the religious faith. But now that I’ve looked into the matter a bit, that doesn’t seem very likely.

I have no reason to doubt my mother’s story, although I know for a fact that Freud didn’t cure cousin Stella’s limp. When I met Stella in Vienna, decades later, she still had a draggy leg.

This raises several questions: Why would Freud have agreed to see Stella? Surely not because she was the niece of his butcher. Did he have other ties to my mother’s family? Was Stella’s father, David Schmerling, a member of the same B’nai B’rith lodge where Freud presented many of his seminal papers on the workings of the mind because Austrian anti-Semitism kept him from university podiums?

In the last year, I’ve learned a few things.

… the members of all the Austrian lodges, from their inception, when Austria was part of the Austro-Hungarian Empire, were members of an elite and educated class.  Mostly physicians, members included lawyers, architects, writers and playwrights, lawyers, academics, and even a few artists and interior designers.  All European lodges had these standards for membership.

So I scratched the B’nai B’rith membership theory.

In the mad flurry of correspondence I’ve been having with the Schmerling family since I made contact with them, and especially with Stella’s niece, Rita, one fact about Stella emerged: She had polio when she was a child.

Stella’s sister, Hermine (Herma) Schmerling is 95 and in a home in London. She has Alzheimer’s, but on good days, her daughter Rita is able to glean some memories from her.  Herma has no recollection of Stella being sent to see Freud, though she recalled — correctly — that the butcher shop in Freud’s building was not kosher, contrary to the Freud Museum’s designation.

I think it’s time to put the Stella-was-sent-to-see-Freud theory to rest. Did I imagine my mother said it? Was she misremembering — or spinning a good story?

Does it really matter?

Over the past year, I’ve found several points of Kornmehl family intersection with Freud, mostly where you’d expect it: At the University of Vienna Medical School. There’s documentation that Viktor Kornmehl went to visit Freud on his 75th birthday as the Chairman of the Academic Association of Jewish Medical Students. And 90-year-old Ludwig Kornel recalls that his father, Ezriel Kornmehl (who changed his name to Ezriel Kornel) transferred from medical school in Poland in order to study with Freud in Vienna. Viktor Kornmehl, one of the family members who encountered Freud

A story that’s a bit more unexpected: Curtis Allina — nephew of the Other Siegmund Kornmehl, and the man who put the heads on Pez — lived across the street from Freud when he was a young boy. In his Shoah testimony, he recalls peering through his window into the psychoanalyst’s office and watching him listen to patients and smoke cigars.

Viktor and Ezriel weren’t very closely related to my family; Curt was, through Anna Kornmehl’s marriage to Curt’s uncle Siegmund Kornmehl — the brother-in-law of the Siegmund Kornmehl who ran the butcher shop in Freud’s building (is your head spinning yet?). But I don’t doubt that 19 Berggasse was a hub not only for Freud’s devotees but also for those who stopped by to say hello to the Kornmehl relatives working in the ground-floor butcher shop.

Back to the Schmerling Family

Those who might have been found in the shop include Marie/Mitzi Schmerling, according to her granddaughter, Rita, who wrote: “My grandmother worked in the family butcher, apparently because they needed the money. She was also able to bring home meat which they gladly accepted.”

Rita also wrote, in her initial note to me after looking at my blog:  “The first photo I saw and instantly recognised without reading any names was of Stella nee Schmerling. That was my darling Auntie Stelly, my mother’s older sister.”

And from a later email:

Auntie Stelly was the best…. My Omi [grandmother Mitzi Schmerling] taught me lots of cooking skills and Aunty Stelly also loved to cook and had done a patisserie course before the war. She… taught me how to make amazing cakes, home-made apple strudel and all kinds of stuff I avoid making nowadays – but I enjoyed all that for many years, especially when my children were young.

As I’ve mentioned, I met both Stella and Mitzi Schmerling once, in Vienna, and wasn’t able to speak with them because they spoke no English and I spoke no German. But now, through their niece and granddaughter, I am getting to know them and other members of the Schmerling family. So as much as Freud is a nice hook, both to interest others and for the historical context/documentation of the era that he provides, the primary goal of my research is to get to know my mother’s family. It doesn’t really matter if Stella saw Freud. What’s important is that I know a great deal more about her — including that the consultation was almost certainly a figment of my mother’s imagination. Or mine.

I’m not sure why either of us would make that up. What say you, Dr. Freud?