The Butcher Shop in Freud’s Building: Kosher or Not?

My inspiration for starting this blog was the discovery that my great uncle’s butcher shop occupied a storefront in 19 Berggasse, the same building where Sigmund Freud lived and practiced.  According to my mother, Freud’s wife had bought kosher meat from one of my great uncles. I never knew which one, however, until I saw the announcement on the Freud Museum website that a kosher butcher shop owned by Siegmund Kornmehl had been incorporated into the museum. It made sense, then, that the kosher butcher shop that Frau Freud patronized was the one right downstairs from her living quarters.

There is still no question that Siegmund Kornmehl had a butcher shop in the building, but it turns out that the meat sold at 19 Berggasse might not have been approved by a higher authority after all.

Evidence to the Contrary

The other day, Jill Leibman Kornmehl, a regular contributor to this blog, sent me the following advertisement from the January 22, 1926 edition of Die Wahrheit, Vienna’s Jewish newspaper. 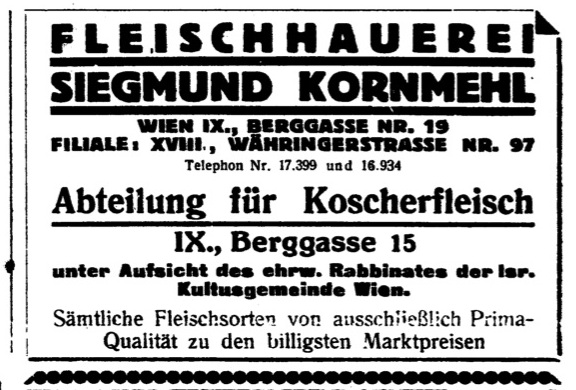 My German is more or less nonexistent, but this suggests to me that Siegmund Kornmehl’s main butcher shop was on 19 Berggasse, and that he had two affiliated butcher shops: one on 97 Währingerstrasse, in a different district, and one selling kosher meat (Koscherfleisch) under rabbinical supervision  (unter Aufsicht des ehrw. Rabbinates) on 15 Berggasse.

But the Freud Museum referred to Siegmund Kornmehl’s business as a kosher butcher shop, both on its website and in The Politics of Reparations, the section in the catalog of the Freud Museum show called “Freud’s Lost Neighbors”:

The kosher butcher shop of Siegmund Kornmehl (1868-1942) was a thriving business: with the main storefront at 19 Berggasse and two other branches nearby, it was one of the most important providers of Jewish care-related services in interwar Vienna, along with the Hospital and Home for the Aged run by the Jewish Community of Vienna. In October 1938, the butcher was forced to close down his three shops and place them under the control of a provisional overseer. His remaining business assets were exhausted through the subsequent liquidation proceedings, and the business was removed from the commercial register in December 1939. At this time, Siegmund Kornmehl and his wife were already residing safely abroad: In May they had fled to Palestine, a journey for which they paid over 100,000 Reichsmarks as a “Reich Emigration” tax, and surrendered their assets as well as their valuables to the National Socialist authorities.

Why these two references to the business as a kosher butcher shop? It’s hard to say. A friend suggested that the researcher for the Freud Museum might have equated “Jewish” with kosher — the lack of interest in religion of the more famous Jew in the building, Freud, notwithstanding.

The picture that photographer Edmund Engelman took of the butcher shop in 1938, blown up and used for the “View from the Outside” exhibition at the Freud Museum in 2002, doesn’t seem to show a star of David, the word “kosher” in Hebrew, or any other hint of rabbinical sanction. 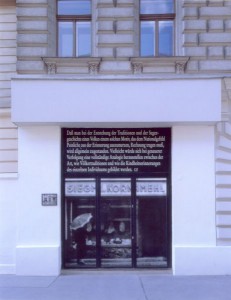 Does it matter whether the shop in Freud’s building was kosher or not? I argued in my first blog post, Did Freud Eat Kosher?, that Martha Freud would have bought meat at my great uncle’s kosher butcher shop, right downstairs, out of convenience, in spite of her husband’s lack of interest in religion. This new information doesn’t  change things: Siegmund Kornmehl’s kosher butcher shop was on 15 Berggasse,  just a few doors down from 19 Berggasse, so it’s still very convenient to a seeker of meat that many Jews — especially those, like Martha, brought up in a religious home — consider to be of higher quality.

In the general scheme of things, what really matters is that all the shops had to be shuttered, the owner and his wife forced to flee to Palestine.

Next mystery to solve: What does it mean that the Kornmehl butcher shops were “one of the most important providers of Jewish care-related services in interwar Vienna, along with the Hospital and Home for the Aged run by the Jewish Community of Vienna”?  What might meat purveyors, old age homes and hospitals have in common?

7 Responses to The Butcher Shop in Freud’s Building: Kosher or Not?