My discovery of Oscar Nemon — probably the most famous sculptor of whom almost no one has heard — started with a comment I received the other day on an earlier post, Richard Tauber: “How Can I Be a Jew?”: 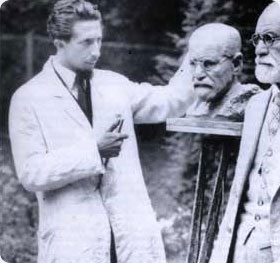 Congratulations on an informative and amusing blog.

As you mention Richard Tauber I thought you or one of your readers might be interested in my quest to find out if my father sculpted the singer.

My father was a Jewish sculptor, born Oskar Neumann, in Osijek Croatia in 1906. He studied in Vienna when he was 18 and sculpted many of the leading singers of the day including Domenico Borghese and Leo Slezak. Arnold Schoenberg advised him to leave Vienna after a year so he went to Brussels and changed his name to Némon. He was summoned back to Vienna to sculpt Sigmund Freud in 1931. Némon also sculpted many of Freud’s disciples including Sandor Ferenczi, Ernest Jones, Paul Federn, Princess Marie Bonaparte and Rene Laforgue.

I’m emailing you because I have just read a 1927 press report about Nemon’s 1927 medallion of Charles Lindbergh which also says that Nemon sculpted Richard Tauber and Tino Pattiera. Many of my father’s papers have been lost during his many moves from country to country. His mother, brother and grandmother were murdered in the Holocaust.

This only hints at some of the famous people Nemon sculpted. But I’ll get to that.

I immediately googled Nemon and found a Wikipedia listing that turned out to be riddled with errors. What tipped me off was this statement:

Although I didn’t know anything about the sculptor’s life at this point, I did know quite a few things about Freud’s dogs. And I knew that Topsy  belonged to Freud’s friend and benefactor, Princess Marie Bonaparte, not Freud. 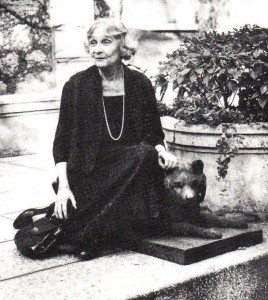 I then emailed Aurelia Young, who posted the original comment, and said I did not want her fascinating information to get lost on the bottom of an older post. I asked if she would be willing to provide a bit more information — and to send some pictures of some of her father’s sculptures:

I am particularly interested in his connection to Freud, of course, given my family’s (much less august) connection to him. I’m tickled to think that your father would have seen Siegmund Kornmehl’s butcher shop on the ground floor of 19 Berggasse when he came to see Freud.

It turned out I was writing to someone who knew far more about the dogs (and people) in Freud’s circle than I did — and had the pictures to prove it. Indeed, it was not Freud’s dog that Nemon sculpted but, rather, Princess Marie Bonaparte’s Topsy.  I learned that Tatoun, the Princess’s other dog, was also immortalized by Nemon. 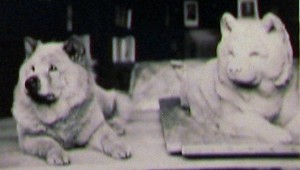 The sculpture of Topsy is next to the title of this post; the original is in the Ashmolean Museum in Oxford. The other pup photos are distributed throughout: the Princess sitting outside her house in Paris, where Nemon sculpted her and her dogs; Topsy posing next to her image; and Tatoun gazing at Nemon’s work (approvingly? critically?). They’re all wonderful in their own way; I can’t decide which I like best. 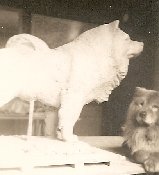 There will be more, much more, here about Oscar Nemon and Freud and the other thinkers and musicians and artists that Nemon sculpted in Vienna. I also hope to help Aurelia Young in her search for some missing busts and for the identity of some of her father’s subjects. But I wanted to start with dogs, since they have been much on my mind. I have been largely AWOL from this blog because I have been writing about the passing of my own beloved Frankie.

I will leave you with a link to a piece in The Telegraph about Oscar Nemon, The Only Man Who Could Get Winston Churchill To Do As He Was Told, including information about his daughter, Aurelia, whom I might have been too intimidated to contact had I known about her title and the company she keeps. Luckily, I didn’t — and she has been a most delightful and helpful correspondent, as future posts will show.

6 Responses to Oscar Nemon: Sculptor of Freud — & His Canine Circle