As promised, Funny Freud Friday will become a regular feature of this blog.  I welcome any suggestions for things to be featured, from comical Freud products and Freud comics to amusing things that Freud said.

I was alerted to the existence of Freud action figures by my friend Lydia, who has guest posted here; she noticed one in the window of a colleague’s office. I easily found this item on line at a site called Archie McPhee, which carries such novelty products as Absinthe Mints and Gin and Titonic Ice Cube Trays (sorry, I stopped at  “G” because I could see that I was in danger of buying several things — or at least spending way too much time on the site). 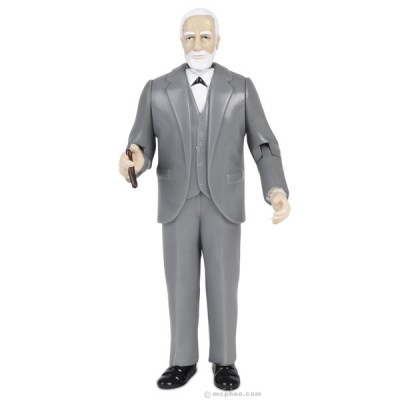 The company has some suggestions for what you might do with this 5″ tall figure:

Prop him on your desk or nightstand to inspire you to explore the depths of your unconscious and embrace the symbolism of your dreams. Much cheaper than paying for professional psychoanalysis. Plumb the depths of your id, ego and super-ego. And don’t worry about transference, this analyst is made of plastic! Whether or not you tell him about your mother is entirely up to you.

Or you can get far more creative, as I discovered by doing a quick web search. The following video was uploaded on YouTube in December 2006 by Dusty Smith.

I was going to write a short exegesis of Freud’s views on human sexuality to indicate why I thought the music was appropriate and very funny but, really, Dusty does a far better job than I could have, and uses far fewer words:

This is a stop-motion video I made of my Sigmund Freud action figure dancing to Bloodhound Gang’s “The Bad Touch.” For those who don’t know, Sigmund Freud is a very famous psychologist who among many other things proposed that everything we do is so we can reproduce (hence the song choice).

Can anyone identify the Samsung appliance behind brake-dancing Freud in this strange  but oddly fascinating effort?