You are here: Home / Psychology / Freud & Dogs, II: A Dangerous Method (If You Fear Dogs) 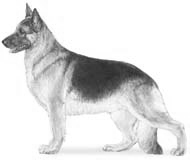 In Part I of this series, I explored Freud’s late life case of puppy love, inspired by  his daughter Anna’s  first dog. Here I discuss the impact his bond with dogs had on his treatment sessions — and on Anna’s.

Oddly, Freud’s pre-eminent biographer, Peter Gay, minimized the role dogs played in his subject’s life and his practice. In the sole page devoted to the topic in Freud: A Life for Our Time

, Gay writes of Freud’s bonding with his first dog, Lün-Yu: “From then on, Freud and a succession of chows, especially his Jo-Fi, were inseparable. The dog would sit quietly at the foot of the couch during the analytic session.”

The introduction to Topsy: A Golden Haired Chow, covered more extensively in my next post, notes that “Freud’s devotion to dogs is the stuff of psychoanalytic legend.” This introduction is the source of my information about the interaction of Freud and his family dogs with Ernest Jones and the poet H.D., discussed below. First, a disclaimer: I have no primary sources for this story; it comes from Allan Showalter who heard it from his teacher, Roy Grinker Sr. Grinker was analyzed by Freud from 1933 to 1935 and founded the psychiatry program at Michael Reese Hospital in Chicago.

According to Showalter in Freud and His Damn Dog:

Freud and his daughter, Anna (also an analyst), both kept dogs (Freud had a chow named Yofi and Anna had a giant wolfhound) that had the run of the offices and shared waiting room. Both dogs would start barking whenever anyone rang the doorbell. The wolfhound… would immediately start sniffing Grinker’s genitals. Grinker reported that, as a consequence, he always entered Freud’s office ‘with a high level of castration anxiety.’

At Freud’s seminar, the wolfhound once lay next to [Grinker] and barked, causing Anna Freud to tell him that the dog was ‘perfectly safe.’ After a pause, she went on to point out that, of course, when the dog was younger, he had a habit of eviscerating sheep. Then she repeated that now he was perfectly safe. Finally, she advised Grinker to pull his tail to make him stop barking. Grinker opted not to follow that suggestion.

I was a little dubious about that story — including the fact that Anna Freud’s dog is described as a “wolfhound” when he is a German shepherd named Wolf — but apparently “wolfehund,” like “Alsatian,” is an alternative name for the breed in German. And psychoanalyst Ernest Jones, Freud’s early, official biographer, describes a similar encounter with Wolf by saying, “He flew at me and tore a piece of my thigh.” In response, Freud only noted that dogs instinctively know who dislike them or fear them.

The notion that Freud kept Yofi with him in the office while he was seeing patients has several sources.

According to the London Guardian:

Analysis became wearisome for Freud as [his jaw] cancer took its toll but Jofi sat with him, a patient listener but one with an eye on the clock, signalling the end of every session with copious yawning and stretching, never allowing Freud to exceed the statutory hour by even a minute.

Stanley Coren, a psychologist who writes often about dog behavior and intelligence, says in an excerpt from What Do Dogs Know:

Freud felt that dogs had a special sense that allows them to judge a person’s character accurately. For this reason his favorite chow-chow, Jofi, attended all of his therapy sessions; Freud admitted that he often depended upon Jofi for an assessment of the patient’s mental state. He also felt that the presence of the dog seemed to have a calming influence on all patients….

Jofi would alert him to any stress or tension in a patient by where he lay down during the session. He lay relatively close to calm patients, but would stay across the room if the patient was tense. Jofi also helped the great psychoanalyst determine when a therapy session was finished by unfailingly getting up and moving toward the office door when the hour was up

Like German Shepherds, chows are not known as a calm breed. Freud warned one of his patients, the poet H.D., to approach Jofi with caution. H.D. ignored him and cozied up to Yofi but, like Anna, found a rival in Freud’s dog: “I was annoyed at the end of  my session as Yofi would wander about and I felt that the Professor was more interested in Yofi than he was in my story.”

And from Grinker via Showalter again:

Yofi…would sit alongside Grinker’s couch and, as dogs are wont to do, eventually scratch at the door to be let out. Freud would let the dog out, and, on his return to his chair, note that Yofi hadn’t thought much of what Grinker had been talking about. When the dog would later scratch to get back in the office, Freud would comment that Yofi had decided to give Grinker another chance.

In another episode, Grinker was emoting with intensity when, as Grinker explained it, “The damn dog jumped on top of me.” Freud immediately responded — by commenting that Yofi was excited that Grinker had discovered the roots of his anxiety.

I hope this story is true for the light it sheds on Freud’s personality. The title of this post is an ironic reference to David Cronenberg’s “A Dangerous Method.” The Freud who I am increasingly coming to know through these and other anecdotes was not the humorless priss of Cronenberg’s film but, instead, more like the Viennese Jew with a dry wit that I grew up with  — my father.