You are here: Home / Psychology / Framing Sigmund: The Mystery of Freud’s Glasses Sigmund Freud’s glasses are as central to his image as his cigars are — perhaps more so. After middle age, Freud is never photographed sans specs, but his smokes are occasionally absent.

Yet while Freud’s cigars are much analyzed, his eye wear remains a mystery. 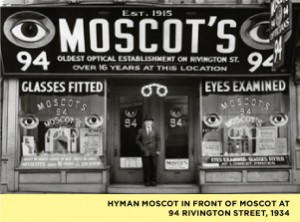 My interest in the topic was piqued earlier this week when my friend Penelope Starr wrote me that a friend of her son’s works for a company called Moscot that “made Freud’s glasses.”

I checked the site. Sure enough, the company sells frames that look like the ones Freud wore. But according to the history section:

The MOSCOT optical roots were first planted in America by Great Grandfather and family patriarch, Hyman Moscot, who arrived from Eastern Europe via Ellis Island in 1899. Hyman began selling ready-made eyeglasses from a pushcart on Orchard Street on Manhattan’s famed Lower East Side, and the rest, as they say, is history!

The company left Europe before the start of the 20th century, thus eliminating Moscot from the running as Optician to Freud. 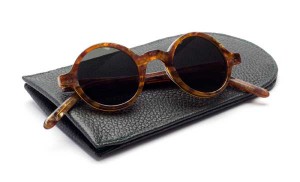 But when it came to finding information about Freud’s actual glasses — nada.

In addition to wondering where Freud bought his glasses, I wanted to know: What did he need them for? Nearsightedness? Astigmatism?

To that end, I wrote to the Freud Museum in Vienna, and received a prompt answer:

Unfortunately we ourselves have little information on Freud’s glasses or his eyesight. The only thing I can tell you is that glasses like his were quite common in style during the first third of the 20th century. He owned more than one pair, and I know of two still existing ones: the one here in Vienna, which is made of celluloid, and the one in London, which has a metal frame. Both materials were common for frames.

By coincidence, I had gone to my optometrist last week to get my eyes checked. Reading this response, I couldn’t help but recall a machine in the eye doctor’s office. Every year, a technician puts my glasses into it — and voila! The details of my prescription emerge.

Surely they have such machines in Vienna.

Maybe it’s an insurance issue. No one wants to be responsible for carrying Freud’s glasses to an optician to get them checked. But I’d bet Lloyd’s of London could handle it.

Speaking of London, I wrote to the other Freud Museum for a second opinion.

Stay tuned. And feel free to spec-ulate here in the meantime.