You are here: Home / Psychology / Crowdfunding Freud: Help Give Vienna’s Most Famous Jew His Due 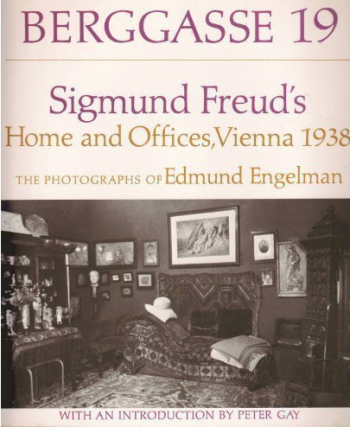 In his introduction to Berggasse 19, a compilation of photographs that Edmund Engelman took of Sigmund Freud’s home and office just before the father of psychoanalysis fled Nazi-occupied Vienna, biographer Peter Gay detailed Freud’s symbolic absence from Austria’s capital after World War II. Noting the lack of tourist brochures,  street names, and statues celebrating Freud in the city where he lived most of his life, Gay concluded, “Vienna has repressed Freud.”

Gay wrote those words in 1976. When I visited Vienna in 2014, the internationally known figure was still shockingly absent from the public eye. In Karl Lueger vs Sigmund Freud: A Disturbing Contrast in Vienna’s Legacies, I detailed how a large statue, metro station, and plaza were named after Karl Lueger, the little known Jew-hating mayor of Vienna, while there were no statues of Freud or streets named for him. The only bust of Freud in the city was pitifully hard to find among the row of lesser knowns at the University of Vienna; the sole park named for him is a nondescript space that doesn’t allow dogs. And Vienna’s Sigmund Freud Museum, while fascinating for its locus, pales in comparison to the one in London, which has almost all of Freud’s belongings.

That’s all about to change (well, maybe not the dogs being allowed in the park part). You can help make it happen–and find some unique gifts along the way.

The Freud Statue by Oscar Nemon

Oscar Nemon (1906-1985), a Croatian-born Jew, may be the most famous sculptor you’ve never heard of. His subjects included Winston Churchill, Queen Elizabeth II, Dwight Eisenhower, Charles Lindbergh…he was in the middle sculpting Princess Diana when he died. This 40-minute video of a talk given by his daughter, Lady Aurelia Young, about Nemon’s life and work is eye-opening.

One of Nemon’s most difficult subjects to pin down — and ultimately one of those he admired most — was Sigmund Freud.

I discussed the growing bond between Nemon and Freud in this article in The Forward in 2014. I met Aurelia Young at the talk she gave on this topic at the Freud Museum that year; we’ve stayed in touch ever since, which is how I learned that the statue of Freud that was scheduled to be installed in Vienna’s Psychoanalytic Institute in 1936 is finally going to find a home in the city for which it was intended — and in a larger version. If all goes well, the installation ceremony will be held at Freud’s former workplace, the Faculty of Medicine at the University of Vienna,  in early June, 2018  — the 80th anniversary of Freud’s forced departure.

To ensure that it will happen, The Medical University of Vienna has created the “Support Sigmund Freud’s Return to Vienna in 2018” campaign. Check it out. It’s a statue worthy of the stature of its subject, in a location of which he would certainly have approved.

I’ve mentioned that the Sigmund Freud Museum in Vienna has limitations — ones acknowledged by the museum itself. To that end, a campaign using a Swiss-based crowdfunding platform called We Make It is looking to raise €80,000 by Christmas.

Rewards include a rather unusual fragrance: 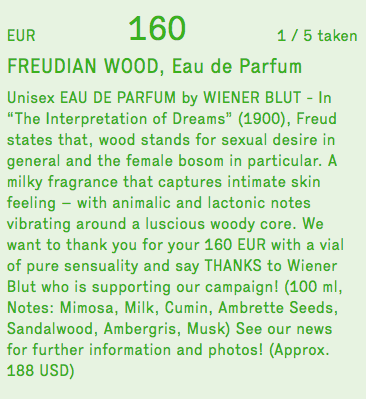 So many “woody” jokes, so little time… Looking for something a bit less suggestive? Freud Museum tote bags are among the other rewards.

The campaign video stars Vienna-born Academy Award winner Christoph Waltz, whose maternal grandfather, Rudolf von Urban, was a psychologist and psychiatrist and the author of  a book titled Sex Perfection and Marital Happiness. One of Waltz’s best known movie roles is that of a Nazi in Quentin Tarantino’s “Inglourious Basterds.” I’m not going to read anything into that. Sometimes a great Austrian actor with the right accent for a role is just a great Austrian actor.

About this Post’s Title: Why Most Famous Jew?

I didn’t want to claim that Freud was the most famous person associated with Vienna; a short survey on Facebook suggested that as many people think of Klimt or Mozart in relation to the city as they do Freud. But I don’t think anyone could argue with this qualification, this narrowing of the category. Freud is unquestionably Vienna’s most famous Jew (sorry, Schoenberg, Wittgenstein, and Zweig) — and his Judaism, practiced or not, is the reason he was forced to leave.