You are here: Home / Austrian history / Did Freud Eat Kosher? 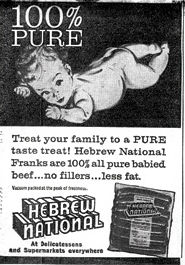 My mother didn’t talk much about her early life in Vienna, but one of the things she told me was that Sigmund Freud’s wife used to buy kosher meat from one of her uncles. I recently learned the identity of this uncle: It was Siegmund Kornmehl, who had a kosher butcher shop on the ground floor of 19 Berggasse,* where Freud’s home and offices were located. (It’s now the Sigmund Freud Museum, with the butcher shop as its art gallery.) My great uncle and Freud shared an address for some 44 years, until the Nazis annexed Austria in 1938.

Some people have expressed doubt to me that the anti-religious Freud would have eaten meat from a kosher butcher shop. Setting aside the whole questioning-the-veracity-of-my-mother problem, that strikes me as a nonissue. There’s a big difference between eating kosher meat when it’s convenient and keeping kosher, i.e., observing Jewish dietary laws on a regular basis.

Consider a modern-day equivalent. A Jewish-born atheist in Manhattan who likes hot dogs lives upstairs from a vendor who sells Hebrew National franks. Does he walk several blocks out of his way to find a guy selling mystery wurst because he doesn’t believe in God?

As the famous Hebrew National “We answer to a higher authority” ad campaign posited, you don’t have to be Jewish to want to eat kosher meat.

The Jewish laws of kashrut, based on Old Testament injunctions, are complicated and arcane but the relevant ones with regard to meat are that only certain parts of certain animals can be eaten, and those animals have to be killed according to rabbinically supervised ritual slaughter.

But here’s why eating kosher meat might be considered particularly desirable. In addition to the failure to conduct the ritual slaughter properly, meat can be deemed traif  (not kosher) if the animal is deemed to have been in poor health. From the Wikipedia entry on kashrut (kosher practices):

The body must be checked after slaughter to confirm that the animal had no medical condition or defect that would have caused it to die of its own accord within a year, which would make the meat unsuitable. These conditions (treifot) include 70 different categories of injuries, diseases, and abnormalities whose presence renders the animal non-kosher.

So…no worries about mad cow disease from kosher meat. Nor can sausage include additives that might be deemed nonkosher for any of the above reasons, i.e., wrong animal, wrong body part. You’ll never find pig snouts or cow hooves among the ground-up ingredients of kosher kielbasa.

That’s not to suggest gentiles in pre-World War II Vienna would have sought out kosher meat. Antisemitism was rampant in Austria, even before the Anschluss. The blood libel persisted, and anything strictly associated with Jews, especially ritually slaughtered food, would have been suspect.

There’s also no doubt that Freud enjoyed a bit of pork.

So Freud’s wife, Martha, would have had to get her traif somewhere else than from Siegmund Kornmehl’s kosher meat emporium — possibly at one of my great uncle’s other butcher shops, which were not pig averse. But both Freud and his wife were brought up observing Jewish dietary laws. And Freud’s favorite dish was tafelspitz, boiled beef. Why wouldn’t Martha like the convenience of just going down a flight of stairs for high-quality beef and why wouldn’t Sigmund want to eat it?

*UPDATE (2018): The Sigmund Freud Museum initially identified Siegmund Kornmehl’s shop downstairs from Freud as being kosher, but that was inaccurate. As the ad below indicates, the shop at #19 Berggasse was not kosher after all — but the branch just down the block, at #15 Berggasse, was. This doesn’t change my hypothesis, then; it just means that Martha had to walk a few steps more to get her kosher beef.

Also — I now know that Freud thought that eating kosher food would make one ill; when he was courting Martha Bernays, he warned her against indulging in her family’s traditions. So I don’t doubt that Martha — who returned to lighting Shabbos candles after her husband died — would have done her kosher meat shopping on the sly.