I learned a great deal about the late Nathan Kornmehl from the many testimonials that were sent to the memorial page of this blog. By all accounts, he was a generous, kind man, someone who didn’t let the tremendous adversity he faced from the Nazis make him angry or bitter. Nathan and Frances Kornmehl in front of their kosher butcher shop in Buffalo. Was it the last place in upstate New York to sell rolled beef?

Which brings me to some essential questions:

I will attempt to address these essential issues separately.

What the Heck Is Rolled Beef?

According to Nathan’s daughter-in-law, Jill Leibman Kornmehl, this was a much discussed subject among the mourners, with no consensus reached. Typical of the comments is one from Nathan’s nephew David Lilien: “It was delicious, and a great childhood memory. I seem to think that it was closer to corned beef, and not as spicy as pastrami.”

Touching, but not precise enough.

So I turned to Google.

A story on NPR on the death of real Jewish delis calls it “the rare truffle of the Jewish meat,” and claims that knowing about it is “like the secret deli handshake.”

Intriguing — but not informational.

The most definitive — and funniest — article I found on the topic is on the World of Mouth blog, and is the aptly titled: Rolled Beef, an Endangered Deli Meat.

So just what is rolled beef? I was never quite sure, so I did some research to augment my own impressions. First of all, it’s a cold cut. It’s served cold, as opposed to pastrami and corned beef, which are best hot. It’s cured in a way similar to them, seasoned with black pepper and garlic and who knows what else. The meat, when sliced, has a relatively smooth finish, with a nice fat to meat ratio. A whole rolled beef has a circumference larger than most salamis and smaller than most mortadellas (pardon the treyf; it’s only for the size comparison; this you should allow). It has a red color from the curing not unlike pastrami. You might say it’s like a cross between a pastrami and a salami. You might also liken it to a Jewish version of pancetta or perhaps capicola (treyf again–feh!).

A story in New York magazine, which dubs rolled beef “the giant panda of deli meats: all but impossible to find in its native habitat,” says that “the only difference in deli parlance between rolled beef and pastrami is the rolling and the temperature at which it’s served (the former cold, the latter hot).”

But a commenter on a Chowhound thread on rolled beef wrote, “it uses some of the same spices [as pastrami] but has its own spicing.” Which is pretty much what Nathan’s nephew, David, said.

There may be even less consensus on the cut of meat used.

One commenter on the Chowhound thread wrote:  “Some producers used brisket (which was, literally, rolled up); others used different forequarter cuts.” But the New York magazine article claimed to use “navels, the fatty belly cut used to make pastrami.”

So, the only thing we can agree on is that it’s served cold and made from beef that’s been spiced and rolled.

Where Can You Find Rolled Beef?

It is available at the Second Avenue Deli as the filling for the most expensive sandwich ($24.95 as opposed to $16.95 for pastrami; sliced steak, the second most expensive, is $22.95). It costs $40.95 a pound, this time tied with tongue for the “most expensive” title.

You can also find it at Dickson’s Farmstand Meats, the boutique butcher at Chelsea Market where, as the New York magazine article on the topic notes, it often goes under the alias of pastrami. It may also come with apricot chutney. The deception — and the chutney —  are just wrong. I can’t sanction this version.

Anyway, neither option is particularly useful to me here in Arizona.

No, I needed a place that delivers and, through the helpful folks at Chowhound, discovered that Ben’s Best KosherDeli, in Rego Park, Queens, air ships rolled beef.

I called Ben’s and was told that the rolled beef costs $24.95 a pound — compared to the Second Avenue Deli, a bargain. But here’s the rub: Overnight shipping — the only kind that makes sense — could cost more than twice as much, maybe $60.

I would like to sample rolled beef but not at $85 or more. I will see if I can get some deli-craving friends to chip in. For now, I will have to be satisfied with the picture that Jay Parker of Ben’s Best sent. It’s next to this post’s title.

Which leads me to, in my mind, the most important question.

Why Have I Never Heard of It — or Tried It — Before?

I grew up in the deli-rich Flatbush and Midwood sections of Brooklyn, and lived in equally deli-friendly Manhattan for 14 years before I moved to Arizona.  I hung out with a deli-loving cohort. We ate pastrami, salami, corned beef, hot dogs, and even tongue, but I don’t recall ever hearing about rolled beef, much less sampling it.

How is this possible?

I have no answer. I put the question to my childhood friends and fellow deli noshers. They came up empty too.

So I put the question out there to my readers: Have any of you out there tried rolled beef? What do you think: Is it just another version of pastrami? And can you still find it near you? If so, do you or any of your friends or relatives have plans to fly to Tucson? 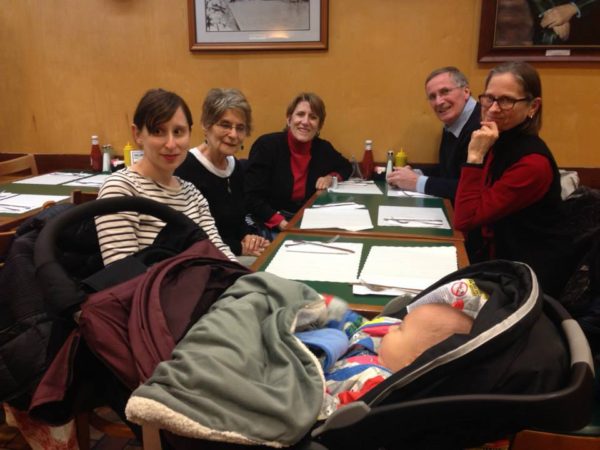 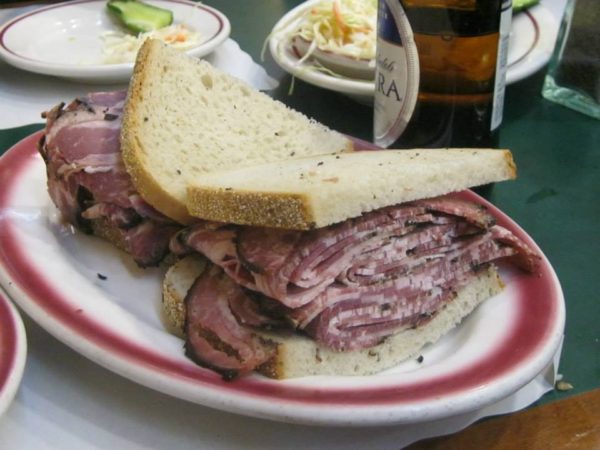 It was delicious, a bit fatty but not very spicy. I’m on team “more like corned beef than pastrami.”

Update 2, 2018: Here’s a story I wrote about rolled beef for The Forward on the occasion of a “memorial” rolled beef being created for Nathan Kornmehl.

As you see from the article, I’m still not sure how it’s made. Three Jews, three contradictory opinions.

Update 3, 2019: Ben’s Best has closed! As far as I know, Sarge’s (nonkosher) deli is the only place that carries it in New York City; it’s not on any other deli menus. I will do further research. Stay tuned.

103 Responses to Rolled Beef: “The Giant Panda of Deli Meats”