I’ve been circling around Viktor Kornmehl, the intended subject of this second part of this family history writing challenge, for a while now. I first looked at his mother, Kamilla, who was buried in a group crypt, married in a synagogue that was later destroyed, and misidentified in a picture; and then at his brother, Bertschi, who helped organize Zionist transports to Israel.

I did mention that Viktor took part with Bertschi in an arborial memorial to the aforementioned Kamilla, which led to yesterday’s leafy digression.

Today, however, I am turning to Viktor and his education. This post also leads back to Sigmund Freud, who was the reason for investigating the Doktors Kornmehl, Ezriel and Viktor, in the first place, and who will re-enter Viktor’s story again soon. The more exciting part is that I may have discovered a link between Viktor Kornmehl and another, more famous, Viktor along the way.

According to Viktor Kornmehl’s’s academic records from the University of Vienna:

What a Gymnasium Education Means

According to Wikipedia, in most of Europe a gymnasium is a secondary school that prepares a student for a university education (what would have once been called a high school that’s on an academic track, rather than one that was trade oriented).

There’s a lot of information available about the University of Vienna, which both Viktor Kornmehl and Sigmund Freud attended, Freud from 1873 to 1881. We wouldn’t know much about Viktor’s high school except for one thing: Sigmund Freud went there too.

The following details are from the Gale History of Psychoanalysis and from the history of the school that became Sigmund Freud Gymnasium.

In 1865, after being home-schooled and studying at a private elementary school, Freud enrolled in the first class of the newly constructed Leopoldstädter Kommunalrealgymnasium. He took longer than usual to finish (8 years) but graduated with honors in 1873 (though he did better in the liberal arts subjects than in science). 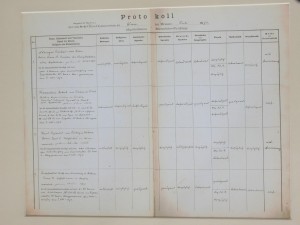 The gymnasium that Freud attended went through a lot of changes..

In 1877 it moved into the Kleine Sperlgasse (which is where it was when Viktor Kornmehl attended). In 1896 it was acquired by the state; in 1901, it was renamed Archduke Rainer Realgymnasium.

Freud contributed to the school’s fiftieth anniversary celebration in 1914 with an article, “Some Reflections on Schoolboy Psychology,” that appeared in the commemorative brochure. In 1946 the school moved to the Vereinsgasse.

In 1967 it moved to its current location at Wohlmutstraße 3 (ah, 1960s architecture. Sorry, but that building is really ugly).

Girls were first admitted in 1971.

For the fiftieth anniversary of Freud’s death in 1989, it was renamed the Sigmund Freud Gymnasium.

As I noted, Viktor probably graduated from gymnasium in 1926, but would have likely been at the school in 1924 — which is when another Viktor, who is also famous in psychology and admired Sigmund Freud, graduated. And that’s all I’ll give away until tomorrow.

This is day 18 of the Family History Writing Challenge. Woo-hoo — only 10 more to go!