In my backlog of unfinished posts, this one — started in November 2019 — seemed the most timely for this pandemic Passover. It’s partly elegiac, which fits the current mood, but it’s also about finding new family. And about endurance.

A deli-denying newscaster plays a part in the narrative too. Fake news! In my dual roles of amateur family historian and professional food writer, I have one subject that keeps calling me: the nearly extinct deli meat called rolled beef. I first read about in the obituary of one of my Kornmehl butcher relatives, Nathan Kornmehl. Thank you, Jill Kornmehl, for “introducing” me to your father-in-law and giving me so much food for thought.

I wrote about it in this blog; I covered it for the Forward; and I most recently revisited the topic for Tablet magazine.

Each time I write about rolled beef, it gets more and more difficult to find. Between the time of the Forward story in early 2018 and the Tablet story in late 2019, one of the prime purveyors of the rolled beef, Ben’s Best Kosher Delicatessen, closed its doors. Grand Kosher, one of the only retailers to make it commercially, went out of business too.  Now only one place in the United States carries it regularly, Sarge’s, which is not kosher.

Also in the interim, one of my closest friends died.

But you can read all about that here; what follows is the backstory.

Almost as much as decent pay, writers crave a word count that allows them to expand on a topic (of course, the best is when these two things are linked). With the Tablet piece, I had a bit of breathing room and a recipe request. And I thought I might be able to do a celebrity tie in.

I looked to see who had commented on my original rolled beef blog post and found Harvey Feinman, a former butcher in Buffalo who knew the recipe for rolled beef, a local staple, and who clued me in to the city’s close-knit kosher meat scene. He was happy to help, even though it was clear he thought my continued interest in deli meat past was a bit daft.

I was far less successful in my quest for a celebrity link. It was a long shot, I thought, but I knew that Wolf Blitzer grew up Jewish in Buffalo in the 1950s and 1960s, the height of the kosher deli/rolled beef scene.

You can’t just email celebrities with requests for a quote. You have to go through their press contacts, in this case at CNN.

I emailed the one that was listed at the top, subject line “Deli question for Wolf Blitzer”:

I’m writing a story for Tablet magazine about a rare deli specialty called rolled beef that was popular during Wolf Blitzer’s childhood in Buffalo, New York — and is now near extinct. There were several butcher shops/delis….that he might have frequented. I was hoping I might have a quick talk or an email exchange with Mr. Blitzer about this topic.

I did not have much luck in getting a response initially, but after copying various people on the distribution list and being a general nudge, I finally got a response. I was told that Wolf  “doesn’t have any recollection of rolled beef. He said he was of course familiar with corned beef, but not rolled beef.”

Fair enough. The connection was just a guess, and I have been known to be wrong a few times in my life.

Both the name Kornmehl and the topic of rolled beef are reader magnets. After the Tablet piece was published, the following email from Louis Trachtman was among the messages that I got from nostalgic Buffalo residents and former butchers:

I grew up in Buffalo, NY and I remember Mr. Kornmehl very well. He was always happy, it seemed — a very pleasant man. My older brother was a delivery boy for Mr. Kornmehl’s butcher shop, which, if my memory serves me correctly, was in the old Broadway Market. I would help my brother many times in the deliveries all over the city. Mr. Kornmehl had a partner in the business for a number of years. His name was Mr. Blitzer. Then in the early 1960’s Mr. Blitzer left and opened his own kosher delicatessen and restaurant on Hertel Avenue. Mr. Blitzer’s son is Wolf Blitzer…the newscaster. Oh yes, I remember “rolled beef,” also. Thanks for your wonderful writing.

Well, well, well. And that’s all I’ll say about that.

But that wasn’t the last of the Buffalo connections. I’ve saved the best for last. 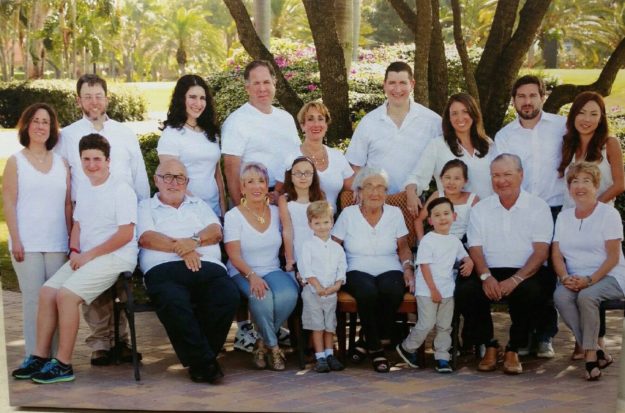 After the Tablet story ran, I also heard from Terry Wolfisch Cole, who said:

What was her connection with Nathan Kornmehl? I wondered.

But that was back in November. With the goal of finishing this post, I wrote Terry, asking for pictures, a bit trepidatiously, I admit. I was worried about Sylvia’s health.

Good news. Not only did Terry send me the wonderful group picture of Sylvia’s on her 100th birthday, above, but she sent the one taken on March 12th of this year, celebrating her 105th birthday.

Grandma is well. She’s in her assisted living facility, rather unhappy about being confined to her apartment.

We hear you. Continue to live and be well, Sylvia.

And that goes for all of you, my extended Kornmehl clan and friends and readers of this blog.  May the angel of death pass over your household, may Elijah wash his hands when he comes in after visiting all those other homes, and may we all be free to get together next year with good hair and enough toilet paper to serve a gathering that usually lasts for hours and involves a great deal of wine.