You are here: Home / Austrian history / Of Genealogies and Possibilities: A New Year’s Musing

It’s that time of year when all the possibilities seem to open up. January 1 is an arbitrary date, of course, but who doesn’t want to believe in fresh starts, in learning from our experiences, even if those experiences sometimes seem arbitrary too?

I ended last year on a sad note, with the accidental death of a friend, Jean, who had become very important to me in a short time, someone who contacted me through this blog. I’ve been contemplating the last clause of that sentence, the doors that have been opened as a result of this forum. Because nothing ever disappears on the internet, Freud’s Butcher remains a portal to a variety of people and experiences, even when I neglect it. I never know who or what will turn up.

This blog is named for Siegmund Kornmehl, the great uncle who sold meat to Sigmund Freud, or at least to Sigmund’s wife, Martha; one of Siegmund K’s three butcher shops shared the 19 Berggasse address with the Freud family for 44 years.

But there was another Siegmund Kornmehl noted on the back of the photograph of my mother’s family that you see at the top of this blog. When I first spotted the name, I was sure my mother had made an identification mistake.

But it turns out I had.

This Other Siegmund Kornmehl (whom I came to call OSK) was both a brother-in-law and the first cousin of the first Siegmund Kornmehl and of Siegmund’s sister, Anna, whom he married.  As it turned out, this branch of the family was quite close to mine; I wrote about the relationship in Rewriting My Childhood: A Tale of Mystery Relatives.

I have seen pictures of OSK and Anna in group portraits–he’s the most easily identifiable relative I have because of that distinctive Smith Brothers beard–but it was only recently that I received the picture of them that you see above, sent to me by Jill Kornmehl, one of the many cousins I found through this blog and an invaluable contributor to it. As if seeing that astonishing beard at close range wasn’t exciting enough, the photo gives a view of a rather debonair man with a twinkle in his eye. One who fit the profession I discovered he had.

Unlike his three male Kornmehl  cousins, OSK went into another business. It was also food related, but a bit sweeter. He owned the Cafe Victoria am Schottentor, not far from where his cousin with the same name and Sigmund Freud lived. I have no doubt that both residents of 19 Berggasse frequented the cafe, though probably not together.

You can see a picture of the exterior of the cafe at the left of the headline. My friend Lydia found a postcard with a picture of the cafe on eBay several years ago; it belonged to a Viennese woman named Hannah Brand. But here’s where the second December surprise comes in: Hannah Brand recently found another postcard of the Cafe Victoria on eBay and bought it for me! It’s a wonderful picture of the interior, isn’t it? And what a thoughtful gesture.

What Happened to OSK?

In the family history post I mentioned above, I wrote that OSK died in 1938 of “non-Nazi related causes.” I’ve reconsidered.

This summer I visited Vienna for the first time since the early 1970s. I went to the Zentralfriedhof cemetery, where many of my relatives, including my paternal grandparents, are buried. The only family gravestone I could find, however, was that of OSK: 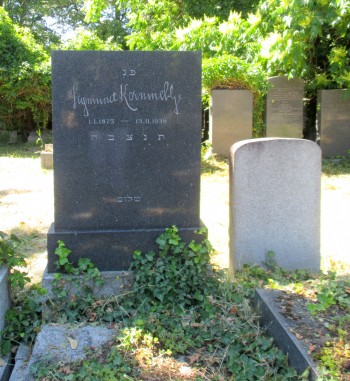 At the time, I was so excited to find a relative and to be guided to his grave by a mystery Bambi surrogate–see Cemetery Schlepping in Vienna: A Shaggy Deer Story--that I didn’t pay much attention to the date of death on the grave: November 13, 1938.**[Update: I misread the date — see link below]

But then I thought about it. That’s three days after Kristallnacht, the “Night of Broken Glass,” which kicked off a two-day series of violent anti-Jewish pogroms on November 9 and 10, 1938, in Germany and annexed Austria. Was it a coincidence that my great uncle died a few days later? I doubt it. The violence visited on Jews, and especially Jewish business owners, was all too well known.

The stamp on the back of the postcard Hannah Brand sent confirms that the Nazis might have coveted Siegmund Kornmehl’s thriving business. At least it doesn’t have a swastika on it. And here we are again, back with the Nazis and tragedy. But would I prefer that I hadn’t received that postcard? Hadn’t known my friend Jean? Of course not. The lives that intersect with ours, however indirectly or briefly, open up worlds of knowledge and new experiences, all pieces in the puzzle of living.

So if I can’t promise happiness for 2015, I know I’m safe in promising possibilities. I hope yours take you to wonderful places.

**UPDATE 8/17/2020: As the post Mystery Adoptions & Cryptic Crypts — which was itself corrected — reveals, I was wrong about the date of OSK’s death, having misread the gravestone. He died in February, not November. But I will leave the original post up, as I did the other one. The process of revising history is sometimes as interesting as the history itself. And besides, who has time for all the rewrites?