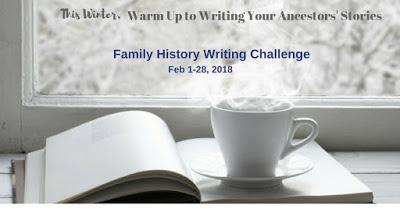 Like many writers, I thrive on deadlines. That’s not to say I don’t rail against them and say many bad words when they close in, but without a strict time frame I tend to dither my time away. When I am paid to write, the incentive for meeting my deadlines is clear. When I am not…well, I have to come up with an artificial construct. Like the guilt or public shame that follows when you commit to taking a writing challenge and fail to meet that commitment.

Exactly five years ago — thus the “quinquennial” in the title —  I took my first Family History Writing Challenge. I was new to genealogical blogging and devoted the entire month of February 2013 to finding the Doktors Kornmehl, Viktor and Ezriel.  Find them I did, with some difficulty — it turns out the families both changed their names, the former to Koren, the latter to Kornel — but I had lots of help and it was fascinating.

I don’t expect much help this time, mostly because I’ve been a slacker about this blog. It’s hard to get others engaged in an activity that you’ve been less than involved with yourself.

So why come back now and subject myself to this stress?

At an indeterminate date in the fall, I am slated to give a talk at the Sigmund Freud Museum Vienna. Until it’s confirmed, I’m hesitant to say much more, except that I’ll be discussing my mother’s immediate family, the eight brothers and sisters who lived in Vienna, including my grandparents, Ernestine and Herman Rosenbaum, and Siegmund Kornmehl, the great uncle for whom this blog is named.

As I’ve said in this blog’s family history narrative, I know a lot about seven out of the eight siblings, but next to nothing about the Bertha Kornmehl Schweitzer and Adolf Abraham Schweizer.

Thanks to this 2018 challenge, that’s about to change. I hereby pledge to write a minimum of 250 words a day. No promises about pictures, the hardest part (for me) of blogging. And no promises about subject matter. I’m very fond of going off on tangents.

I’ve been pledged, you’ve been warned.