Some of the topics I cover on this blog are difficult; my last few posts have been about the Holocaust, Austrian antisemitism, and my mother’s sad past. Today, however, I move on to a far happier subject: Renewed friendships.

I’ve mentioned the many relatives who were located through this blog.  But as wonderful as it is to unearth family ties and potential relationships, perhaps it’s even better to rediscover ties that already exist. I’ve been thinking about this a great deal since I started posting about my mother here; it’s meant a lot to have childhood friends come by and comment on her from first-hand, but very different, perspectives than mine.

So… I’m extremely pleased to highlight the first of two friendships that were rekindled through this blog, that of Bernie Kornmehl and Arthur Aronoff of Buffalo, New York. I asked the two men to describe how they knew each other. Arthur answered directly and Bernie responded through his wife, Jill Leibman Kornmehl, an invaluable contributor to this blog. Jill also provided all the pictures and revealed the fact that Arthur used to be known as Archie.

A few years ago, I re-ignited my interest in Vienna’s Jewish history when I read de Waal’s The Hare with Amber Eyes.  That led me to your blog and all the information there about the Kornmehl family’s links to Vienna; when I saw the names “Kornmehl” and “kosher butcher” I knew there must be a connection with Nathan [Bernie’s father; see The Last of the Kornmehl Butchers (Maybe)]. From there I re-connected with Bernie.  He and I were good friends as children in Buffalo, grew up on the same street, and went to school together through high school.  Our father’s shops — Nathan Kornmehl’s kosher butcher shop and Sam Aronoff’s sign painting shop — were on the same street. I am so glad we reconnected, and thank you for your role in it. Today Bernie and I are both lawyers, one of us in New York and the other in Washington.

I have had email exchanges with Jill (but have not met her) and a long phone conversation with Bernie to go over the missing years (decades). Jill’s genealogical work is excellent. I have no family connections to Vienna, but I have had some success dealing with my father’s Latvian antecedents.

Why do we pursue genealogy? Partly because we can–given the resources available on the internet, it’s relatively easy and cheap. We reconnect to different eras, we find out how we are like and unlike our ancestors.  We admire their accomplishments, we learn or re-learn lessons from their fates. Sometimes we find out things about our immediate families that no one told us–whether deliberately or inadvertently. It’s a hobby, it’s detective and analytical work, it’s history, and ultimately it’s a personal meditation. 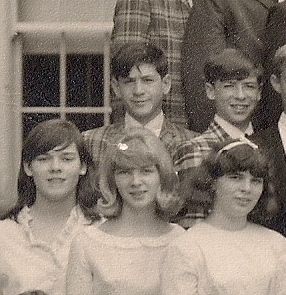 Bernie, above the girl with blond hair. I couldn’t bear to crop out the rest of the picture. More madras!

The connection between Bernie and Arthur goes back many years to North Parker Avenue in Buffalo where they both grew up.  Bernie and Arthur walked to grade school PS 86 (now called the St. Lawrence Academy) together in the morning.  On Friday nights, they were often found watching The Twilight Zone and eating fresh buttered popcorn made by Mrs. Aronoff.  Years passed and they lost touch with each other. Both had left Buffalo and coincidentally became lawyers.  Their paths did not cross until Arthur reached out to the blog to locate Bernie.

Genealogy offers a bridge between the present and the past.  That bridge not only serves to connect generations of family members no longer alive, but also friends that are searching for lost connections with those they knew years before.  Reuniting Arthur and Bernie has been a wonderful way to validate how a hobby like genealogy can have a lasting benefit beyond family documentation. 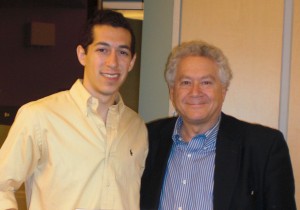 Bernie with son, Jason. To complete the circle: Arthur has only spoken with Bernie on the phone since they reconnected, but he met Jason — who is studying law at George Washington University —  a few weeks ago, in D.C., where Arthur works.