It’s a bit confusing. Bear with me here. 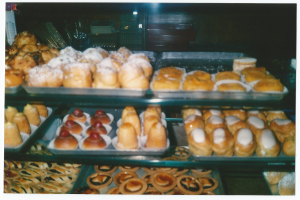 Christine’s miniature Orangentorte in the window of Pasticceria Torino, Parma

Christine Berl is a friend of my friend Lydia Davis, who has been a guest poster here. Lydia is also very accomplished but does not have any Viennese parents, Jewish or non-Jewish. Knowing of my interest in Viennese Jewish parents (I have two), she told me that Christine was looking into her family’s past. I asked Lydia for Christine’s contact information.

After exchanging a few emails, I asked Christine if she would write a guest post about her genealogical search. She did, and it included a very interesting snippet about how she had reconnected with her old friend, Susan Husserl-Kapit, whose psychoanalyst mother, Hanna Kapit, knew Freud when she was young. This naturally piqued my interest too.

Then there was this: I’d heard from Lydia that Christine was an acclaimed composer but I did not know, until I asked Christine to write a bio for her guest post, that she was also a Viennese pastry chef. She had even written a book on the topic, The Classic Art of Viennese Pastry.

I had recently discovered that one of my great uncles, the “other” Siegmund Kornmehl, owned a cafe. I became excited at the idea of having Christine write about Viennese pastry and cafe culture. (Incidentally, Christine inherited her interest and talents in pastry baking from her mother, the non-Jewish parent. Just so you know that I am completely nondenominational when it comes to sweets.)

More About the Freud (& Pastry) Connection 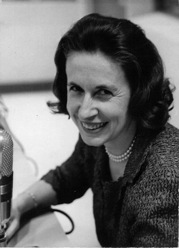 Because of her Freud ties, I was also interested in Susan, the friend — who turns out to be a cousin — with whom Christine had reconnected. I discovered that Susan’s maternal grandfather, Herbert Elias, was a professor of medicine and a colleague of Freud’s at the Vienna Medical School. Elias and Freud moved in the same Viennese intellectual and social circles, although Hanna Kapit writes in “What Made Me Want to Become a Psychoanalyst,” an essay about her childhood in Vienna, that her father disapproved of Freud’s theories.

Hanna Kapit did not disapprove of Freud’s theories, and became well known as a psychoanalyst after she moved from Vienna to New York City, practicing for more than 50 years. As this New York Times story attests, she also continued to be interested in cafe culture… and pastry, which she often bought from her daughter’s friend, Christine.

Trying to Sort Out the Connections

A great flurry of emails between the three of us ensued. I became overwhelmed and couldn’t figure out how to sort out the information, which was all riveting  — and often contradictory.

But I was determined. I finally decided not to stress and just do my best by presenting what Susan and Christine sent me, with their permission — adding some materials that I’d found by doing Google searches.

Note: I am not going to try to reconcile any inconsistencies, because it would only engender more correspondence. Let future genealogists deal with it. I did, however, make one correction for Susan, after she read through my post. Christine says, below, that her friend is related to the 20th-century philosopher Edmund Husserl, but Susan notes: “My paternal connection with Edmund Husserl is not direct, though the philosopher was my maternal great-grandfather’s best friend. He named his daughter Elizabeth after my great-grandmother. So he was related somehow by blood on my father’s side and closely by friendship on my mother’s side.  I’m still working to find the blood connection.”

Christine is now living in Tuscany, Italy. Read about her foray into belly dancing (relevant to this story, as you’ll see) here: Shimmying Her Way Into A New Career. Primarily a composer again — she just finished a choral work using text from Lydia’s latest chapbook, The Cows — she also teaches Viennese pastry classes in Switzerland, Austria and, sometimes, Tuscany.

How Christine and Susan Knew & Reconnected With Each Other

In their own words… 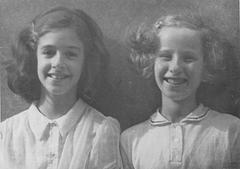 Susan Husserl-Kapit (left) in her PS 9 days. She is with Tina, a mutual friend of hers and Christine’s, because we couldn’t find a picture of Susan and Christine

Christine: Last year my cousin Susan Husserl, who is related to the Viennese 20thcentury philosopher Edmund Husserl and whom I hadn’t seen since third grade in PS9 on Manhattan’s Upper West Side refound me through a knitting blog on which I had posted  a comment.  That was the beginning of a new, invigorated search to prove that we were indeed cousins as her mother had told me the first afternoon that Susan walked into my class in PS9 carrying her violin and said that her family was from Vienna.

Susan: We don’t know how we’re related. My mother told me as a child, when Christine and I were in the same 5th grade class, that we were cousins. How distant she didn’t know. We were close friends in the 5th grade but Christine left to go to a different school, Performing Arts, I think. As an adult, she left the country for a while. Came back after several years and called my mother, I’m not sure if it was to get in touch with me, tell her about her Viennese pastry creations, or look for a place to stay. Probably all of those things. My mother did then start ordering ‘ Vanilla Kipferl’  from Christine regularly. They saw each other when Christine brought the cookies to my mother. I would get to eat them whenever I visited NY and found them to be the same as the delicious ones I had grown up with.

But I lived in Boston at the time… So, I didn’t cross paths with C again until my mother invited her during one of my NY visits, around 1990. I knew then that she was a belly dancer as well as a pianist, composer, and baker and I remember thinking she didn’t look like my idea of a belly dancer.

I haven’t seen her since.

Years later, I took up belly dance so wanted to find her. Wanted to see her dance. Figure, if she’s as good a dancer as a musician, it’d be spectacular! Asked a friend who’d known her in college but neither of us could ever find her. First, we searched through regular contacts, then through the Internet. Finally, around a year ago, I found a mention of her in a blog about knitting that was posted by a classical singer in NY. She may have been a friend of C. Christine had sent in a comment (and maybe pictures) about a Viennese-related needlepoint project she had done.

I immediately wrote to the classical singer, asking if she knew Christine and explaining that I was an old childhood friend and also a relative. Five minutes later, I kid you not!, I got a lovely, excited message from Christine, and we’ve been in touch ever since. Terrific! … But I still haven’t seen her.

Christine: The knitting blog was that of Lisa Daehlin, an opera singer and well-known knitting designer.  I had posted a remark that Victoria de los Angeles, the legendary Spanish soprano for whom my father played for over 20 years, was an avid knitter.  I had previously downloaded a pattern for a cape.

Stay tuned for Christine’s original genealogical story from which this is a very long digression.