Last week I visited Manhattan’s Leo Baeck Institute, known for its excellent collections of materials relating to Europe’s German-speaking Jewish communities. I was hoping to shed some light on the everyday lives of the Kornmehl family in Vienna.

I had a limited amount of time and, unsure where to start looking, I browsed the listings of microfiche documents that weren’t available on line.

One item caught my eye: a prayer book belonging to a Viennese mohel —  it was stamped with the name Sigmund Löwy, Mohel, Dipl. Aut. Operateur, 1., Schoenmaterngasse Nr. 6, Wien — that also contained a handwritten record of circumcisions in the late 19th century, presumably the ones that he performed.

I already know the dates when the eight Kornmehl siblings entered the world. I thought it might be interesting to find out if the three brothers’ births were marked with a sanctified snip.

I Encounter Some Familiar Names

I didn’t find any Kornmehls in the records but one page of the book grabbed my attention (look to the left to see the original names and dates in Roman, rather than Hebrew, script): 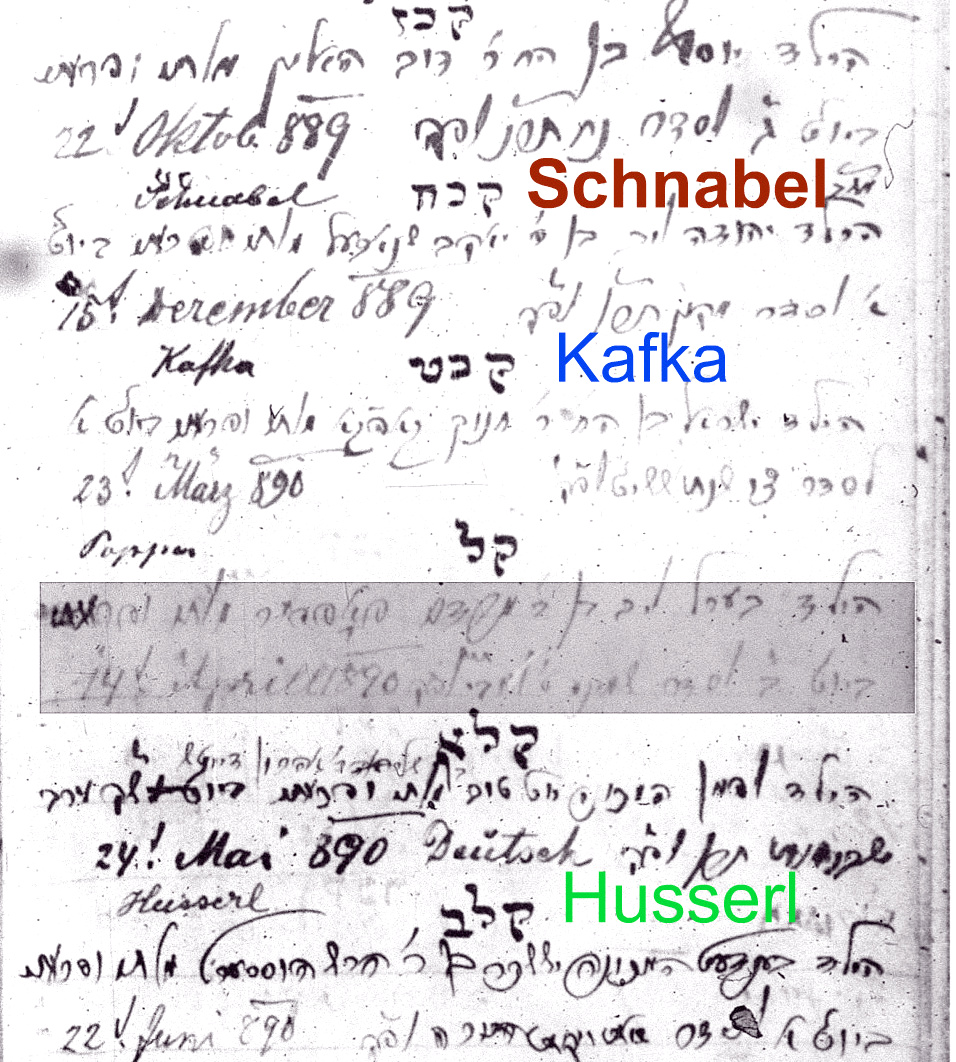 I’m aware that these records don’t document the circumcisions of the most famous holders of these names: Artur Schnabel, classical pianist and composer; Franz Kafka, the writer best known for The Metamorphosis; and Edmund Husserl, the founder of the philosophical school of phenomenology. All three were born Jewish in the Austro-Hungarian empire, but not in Vienna and not on the dates noted.

Of the three men, Schnabel lived in Vienna for the longest period of time, though he eventually moved to Berlin. Husserl got a Ph.D. from the University of Vienna, but didn’t live in the city before or after his studies (by coincidence, I know that some members of his family did later reside there; see Belly Dancing, Knitting, Pastry and Psychology: A Virtual Convergence). I’m not aware of  any connections of Franz Kafka’s family with Austria’s capital.

And I have no idea if any of these renowned men held on to their foreskins. Husserl was baptized as a Lutheran at age 27, so if he was circumcised it didn’t inspire him to remain in the faith. In fact, I don’t know how common Jewish circumcision was in Europe in the late 19th century. It’s a complicated topic, and my attempt to research it led me to territory I didn’t care to enter, including rabid rants against the practice.

I was just tickled by the notion of three great names in  European music, literature and philosophy being embodied in a trio of Viennese baby penises.

The original circumcision document image is courtesy of the Leo Baeck Institute. My limited photo editing skills are responsible for the large colored names and the (accidental) darkened line across the text. I would have preferred outlining or highlighting the names and dates but don’t know how to do that.

Wikimedia Commons is the source of the all the other images: the happy post-circumcised baby next to the title, the illustration of “Jacob’s Circumcision” in the Regensburg bible, and the gallery of famous men who may or may not have remained intact.