Yes, it’s been a long time since I posted in the Funny Freud Friday category–or at all, come to think of it–but the timing was right.

As a freelance writer, my budget doesn’t include the many Freud tchotkes I covet, so you can imagine how excited I was to find that I could use my credits at a local used bookstore for a Sigmund Freud plush toy — officially, The Unemployed Philosophers Guild’s Sigmund Freud Little Thinker. 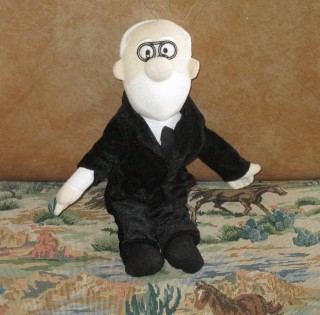 I’m afraid I got a little carried away. I took Freud with me to a restaurant And I dressed him up for the 4th of July. 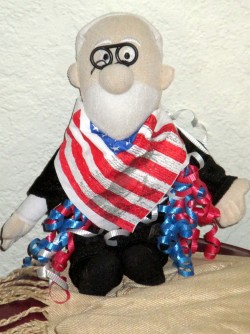 But I felt better when I discovered that I’m not the only one who gets a kick out of plush toys. Frequent contributor to this blog Jill Leibman Kornmehl adapted a childhood toy of her son, Adam–who is now 23–to represent one of our family members, Rabbi Nuchim Kornmehl, featured in the post The Bride Ate Chocolate. 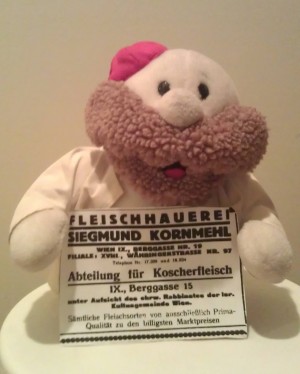 He turns out to be a great spokesdoll for this blog. 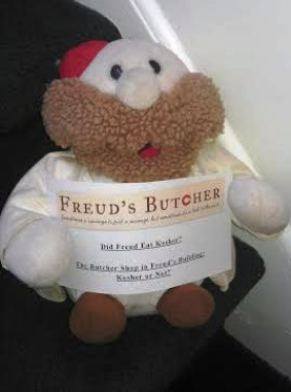 But I realized something was missing. I now had a toy representative for genealogy and one for psychology. But what about meat?

I could not find any meat plush toys–and a meat doll appears to be something obscene–but I did find a butcher shop-themed playset from around 1850. 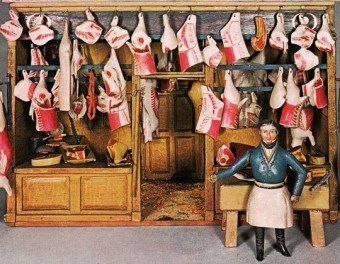 According to Robert Culff’s The World of Toys, “these exact representations of butchers’ shops were very popular, with their modeled joints, strings of sausages, and whole animal carcasses hanging from real iron hooks, tier by tier, ’round the wooden butcher.”

Gotta love those Victorians, the same people who brought you brooches made with the hair of a dead loved ones.

The Jewish Museum Vienna Plays With Toys, Too

But when I said the timing was good for Funny Freud Friday, I didn’t just mean the day of the week. I now have the excuse to share an illustration that relates to an article I wrote about The Jewish Museum Vienna that came out yesterday in The Jewish Daily Forward.

In discussing the museum’s irreverent attitude I wrote:

.. the Sigmund Freud display features a Freud action figure and plush doll as well as an Andy Warhol portrait. I suspect the father of psychoanalysis would have enjoyed the conceit. I base this impression not only on the fact that Freud wrote a book titled “Jokes and Their Relationship to the Unconscious” but also on the self-deprecating wit of a Viennese Jewish man I knew well, my father.

To read the rest of the piece, see Searching for My Parents’ Past In Vienna.

Update: My alert Facebook pal Erin said plush meat toys abound — if you look in the right place, pet toys. Sure enough… Here are just a couple of examples: 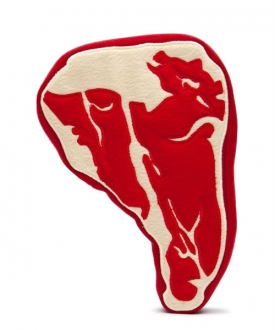 This is the Steak Dog Toy from Dogcessories which, according to the site, will “squeak when it’s on the grill and float if it falls in the pool.”

And then there’s this: 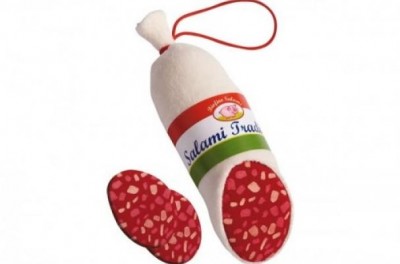 I’m afraid I can’t find out who sells these. If anyone knows, do tell.

And since I’ve opened up that door (and because it’s my blog and I can do what I want), here’s the reason I’ve been a bit inattentive to Freud’s Butcher. Meet the new member of my family–and a genealogical mystery–Madeleine: 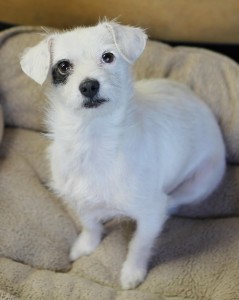 All together now: Awwwwww.

5 Responses to Funny Freud Friday: Toying Around With History