I first saw the following image of Jung and Freud enjoying a schvitz on Facebook. It was posted by the mysterious Jacques Lacan — mysterious because, in case you’re not familiar with the French philosopher and psychoanalyst, he is dead. And, yet, he is still posting on Facebook. (Do I need to worry that my posthumous status updates will be more interesting than my current ones?) 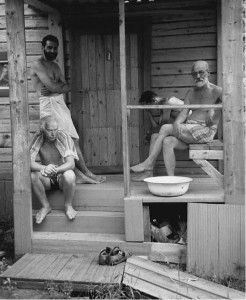 Mystery Jacques Lacan posts lots of Freud pictures without identifying their sources. I guess it’s difficult for dead people to access photo archives. I did not have a similar excuse for posting this unattributed picture of Freud and Jung on my own Freud’s Butcher Facebook page, however.

But not everyone is quite so lax. And so zealous Freud researcher David C. Farmer, who played Freud in Freud’s Last Session in Honololu, discovered that it is a fraud. He directed me to “On the road with Carl and Sigmund” which disclosed that this photo, labeled “Freud & Jung relaxing with friends at a Turkish banya during a psychoanalysts’ retreat, ca. 1906,” is in “the imaginal realm.”

It looks less like a Turkish banya than a Finnish sauna to me, but since we’re in the imaginal realm, I suppose it doesn’t matter.

Layers upon layers. It turns out that this site took its images from another site, Historacle.org, which posted a photo(shopped) essay called “The Well Documented Friendship of Carl Jung & Sigmund Freud,” purporting to trace the bromance of the famous men from around 1906 to 1909. The written portion seems fairly straightforward, even factual, but the illustrations and captions, reproduced here, are a hoot. There are several good ones, but I think my favorite is:

Then again, the psychoanalysts getting ready to hop on the next passing train is pretty impressive too:

But if you haven’t already done so, check out the original site, where you’ll also find the ill-fated pals on safari, fishing for halibut, adventuring in the Arctic, shooting pool, and hanging out with their sweethearts on furlough from war.

Which is your favorite?