You are here: Home / Genealogy / Why Genealogy is Like Jeopardy!

I’m in a scary place.

Anyone who has embarked on a large project, especially one that involves a lot of research, knows the place I mean. It’s the terra incognita where you wander, trying to find your bearings. Figuring out how to navigate this land, determining the best tools to use and where to find them, can be paralyzing. I’ve already learned more than I could have anticipated about my mother’s family and I’m gathering a lot of interesting information about Freud and meat, but to what end?  It’s fun to play around with ideas on this blog but if I want to write a book — and I do — I’ve got to figure out where I’m going. As the premise of America’s favorite quiz show, Jeopardy!, has it, I need to phrase my research in the form of a question.

I’ve been in this scary place before — with my first book and my most recent one. Although I wrote three research-heavy books in between, they were travel guidebooks with strict formats. I was able to bring my voice and my opinions to them but the publishers provided the template.

The background to this story is a bit complicated. When I was a graduate student at NYU, I decided to write my dissertation on modern American poetry and chose as an adviser a professor with whom I’d taken a Yeats seminar. Instead of the initial idea I presented to this adviser, he suggested I compile an edition of the collected poems of Paul Blackburn.  He had been asked to edit the collection by Blackburn’s widow but didn’t have time to undertake the project himself. 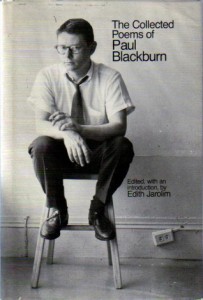 I jumped at the idea. I really admired the poetry, and who doesn’t want her dissertation published?

But I didn’t have a clue about how to go about editing a volume of collected poems.

To make the project manageable, I broke it down into a series of tasks — questions I had to ask.

First, I had to decide what the collected poems would consist of. Since Blackburn was very prolific, I opted to include only  poems that had been published.

Then I had to decide what publication was. That may seem obvious, but Blackburn was not an academic poet; he used to distribute his work through mimeograph (yes, I realize I need to define that for some of you). Should mimeographed work be considered publication? I decided it should, because the poet had clearly intended to make the work public.

Then I had to figure out how to arrange them. By major volume, with an addendum for poems that didn’t appear in any collections? No, because many poems were published more than once in different volumes. Strict chronology it would be, then. After that I had to determine when each poem was written, and after that which  was the final version… You get the picture.

It was painstaking and sometimes frustrating work, involving research libraries all over the country, and it took a long time. But it was also very satisfying.  Once I figured out what I needed to know, I could set about doing it.

Here’s the introduction to the book, which tells a bit more about the research as well as about Paul Blackburn.

Am I Boring My Dog?

This book has another complex back story. As I mentioned, I wrote three travel guidebooks as well as many, many  travel articles. Then I got a dog  — my first, ever — and discovered that he didn’t like to travel. Then he developed diabetes and required two insulin shots a day. 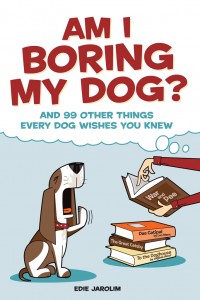 This curtailed my travel even further, but not my writing. I decided to write the book I wished I would have had when I first got my dog —  a guidebook to the world of dogs, as I later came to think of it.

When I was putting together a proposal, I hit on a structure that became a methodology. I posed 100 questions to which I wanted the answers.

The feeling of terror for that book came not at the beginning, but at the point at which I realized just how many dog books were out there. Luckily, I already had a contract with a publisher that I couldn’t back out of.

So I added my dog book to the great number of dog books that already existed. And guess what? It turned out to be different from all the other dog books because I’m a different person and I have a different dog. But it’s hard to keep that in mind when you’re in the scary place.

The HUGE, Scary World of Genealogy

Now here I am again. If I thought there were a lot of dog books — and dog bloggers — I have discovered there is no comparison with the number of genealogists and genealogy blogs.

Freud’s Butcher was just accepted to the Geneabloggers site, which was very exciting, and a little intimidating as I discovered that there were more than 2,800 blogs on the site. I guess that makes sense. Not everyone has a dog, but everyone has ancestors.

But they don’t have my ancestors. And even if they did, they wouldn’t have the same questions about them as I do about mine.

I wrote this post to psych myself, to remind myself that I’ve been here before. I also wrote it to motivate myself to focus. So I here vow that next week I will post the top ten questions I would like my research to answer.

In the meantime, I discovered a great post from the Olive Tree Genealogist that breaks down the different styles of genealogical researchers: The Hunter or Detective; the Gatherer or Ancestor Collector; the Ancestor Finder; the Hoarder; the Junkyard Collector; the Scholar; the Analyzer; and the Planner.  It’s fascinating.

I think I fall somewhere between the Scholar and the Analyzer in my research techniques though neither quite fits my need to establish questions to answer before proceeding with my research.

Maybe I should suggest a Jeopardy! contestant category?