You are here: Home / Genealogy / The Importance of Being Ernestine: A Mother’s Day Tribute I never knew my grandmother, Ernestine Kornmehl Rosenbaum. She died long before I was born. And, try as I might, I can’t recall a single interesting — or uninteresting — thing my mother might have told me about her. You can’t force memory, I suppose — and those Freudian free-association sessions are expensive.

But you can work on genealogy.

Although Judaism is a matrilineal religion — a child’s status as a Jew is determined by the mother’s birth religion, not the father’s — that doesn’t make information on Jewish women any easier to locate; they rarely owned property, held professions that turned up on business records, etc. As a result, I know far less about my female ancestors than I do about my male ones, and I haven’t really made an effort to remedy that gap.

Although I’ve always thought of Mother’s Day as an artificial Hallmark holiday, it’s a good occasion to highlight three women in the family, all of them named Ernestine — or Earnestine, Ernestina, Ernestyna — Kornmehl at some point in their lives. And to vow to find out more about them.

Note: The idea of the Three Ernestines — and much of the information about the two who aren’t my grandmother — came from Jill Leibman Kornmehl. Thanks, Jill — and Happy Mother’s Day to you.

I have devoted a great many posts to the story of  Ezriel Kornmehl but none to his wife,  Ernestina (or Ernestyna). She was born in 1897, and had four brothers and one younger sister.  Her father, Marcus (Mordecai) Karpf, was a big macher in the town of Jaslo, and arranged for her to marry the young doctor Ezriel, six years her senior.

According to the History of the Jews of Jaslo:

Mrs. Kornmehl was highly respected in the community and especially in the Zionist movement of the city of Jaslo. She was very active in social work and helped the sick, orphans and needy people…. She always listened attentively and tried to help solve the problem with sensitivity and finesse.

She and her husband and their son, Ludwig, escaped to Russia prior to the German arrival in Jaslo, where Ernestina “was also very active…on behalf of the Jewish refugees of Poland and helped in every possible way.” The family returned to Poland following WWII; Ezriel practiced medicine, Ludwig started medical school and all three applied for visas to go to Israel. Ezriel died the day the visas arrived — that’s another story —  but Ernestina and her son went to Israel, where Ludwig finished medical school and worked at Hadassah Hospital in Jerusalem.

I’m not sure yet whether she died in Israel or moved to Chicago when her son did. I only know that, of the three Ernestines, she was the only one who died a natural death.

According to the family profile written by Richard Gilbert, her grandson, Earnestine Kornmehl was born in Berlin on July 3, 1900 to Pinchas Kornmehl and Rachel Reich. The family soon moved to Vienna. On June 15, 1919, Earnestine married Rachmiel Weitzner and they had two children, Rosa and Kurt. They lived in district II — the Jewish district — on Glockeglasse 19, until they had to move to the Jewish ghetto when World War II began. Rosa escaped to England, but the other family members were killed, probably in Treblinka.

Ernestine Kornmehl Rosenbaum (a.k.a. my grandmother)

Ernestine Kornmehl was born in 1885 in Vienna to Chaim Heinrich Kornmehl and Chaya Henriette (Scheindle) Kornmehl. She married Hermann Rosenbaum, who was was born in 1876 in Pilzno, Poland. They had only one child, Henriette (Rita) Rosenbaum Jarolim (born 1913), my mother. Both Ernestine and Hermann were deported to a death camp from Riga in 1942. The last picture of the family together was taken in 1938; it’s next to the title of this post.

Pretty grim stuff, I know. I’ll leave you with a much happier picture of Ernestine and my mother, taken in 1915 or 1916. And with a thanks to my mother for being brave enough to make a life in America on her own. 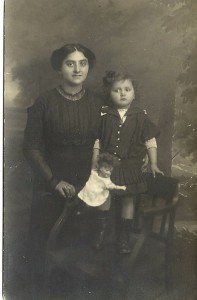