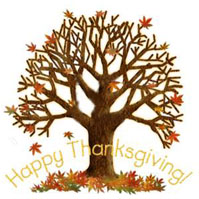 Starting a new blog when you have been accustomed to writing about another subject requires looking at occasions from a different perspective. In September, I wrote Blogging While Jewish: A Rosh Hashanah Reverie, exploring how it feels to focus on my heritage. Now I’m encountering my first Thanksgiving as a people- rather than a pet-oriented blogger. Last year, I could chose to write about topics like Thanksgiving Foods That Are Toxic to Cats and Dogs. This year, as a family historian, it’s more like Thanksgiving Was Our Least Toxic Holiday.

But that’s putting a too negative spin on what was, if my memory serves me, a genuinely nice occasion.

The Family That Didn’t Eat Together NOT our family dinner

I am embarrassed to admit this, but our family rarely ate dinner together. My father worked late. My sister had after-school activities. I liked to read at the table. And —  even more embarrassing — our mother prepared separate meals for us, even after she started working outside the home. I don’t recall her ever sitting down with any of us or having a meal on her own; it was catch as catch can. Perhaps the only communal meals the female family members had were on TV trays.

Perhaps I should mention that my mother didn’t like to cook, though she spent a great deal of time on that activity, and she wasn’t very good at it.

Luckily Jews don’t have a clearly defined sense of hell — and I don’t believe in whatever it might be anyway — because surely I would be going there for revealing such family secrets. Which brings me to…

Friday night was no exception to our tradition of not eating together. My half-heartedly observant mother didn’t even light Sabbath candles.  And the popular equating of Hanukkah with Christmas notwithstanding, our family didn’t do much to celebrate this minor Jewish holiday; I remember dreidls and chocolate coins and singing when the menorah was lit but recall eating dinner together only occasionally.

That left Rosh Hashanah and Passover. I don’t know what these holidays were like before my sister and I were old enough to have strong opinions; probably reasonably low key.  When we came of demanding age, however — and I’d imagine that since we are both smart and stubborn, that was fairly early on — my sister wanted more religious rituals on those occasions, while I wanted fewer.

It only got worse on Passover after I went to a yeshivah junior high school and my sister spent a year in Israel. Having studied and parsed biblical texts, I went through a religious phase and wanted to show off my prowess in reading the Haggadah in Hebrew, an activity my sister had always been keen on. She had the Sephardic accent that Israelis have; I had the liturgical Ashkenazi accent — not to mention a smattering of Aramaic.

And then there were the Passover songs.  As my friend Martha reminded me yesterday, the words are the same in all traditions but the tunes differ widely between, say, Poland and the Ukraine….even one town of Poland to the next. My sister learned one set of melodies in Israel, while I stuck to the ones we’d always sung.

Add to that the fact that neither of us carries a tune particularly well. You can imagine what the dueling Passover songs — many of them difficult to pull off under the best of circumstances — sounded like with dueling Hebrew accents.

Not a Viennese Holiday

I think the Jewish holidays must have been difficult for my parents, even without their children’s squabbling. How could they look back on the occasions they had celebrated in Vienna without regret? Except for my father’s brother, all the members of their immediate families had been killed in the Holocaust. I can’t imagine the pain of loss that the Jewish holidays must have evoked, and neither of my parents seemed to find solace in religion.

There were no such painful associations with Thanksgiving.

And if coming to America was bittersweet because they were forced to leave Austria, my parents embraced this country enthusiastically, as so many refugees do. They felt immense gratitude towards their new life, their new family. Somehow, that gratitude shone through and created a family meal that didn’t involve an undercurrent of mixed feelings. Not to mention mixed Hebrew accents.

And, like other latecomers who sought asylum rather than domination, our family didn’t even have to feel guilty about the Indians.