You are here: Home / Genealogy / In Stiches: My Family’s Sewing Tradition 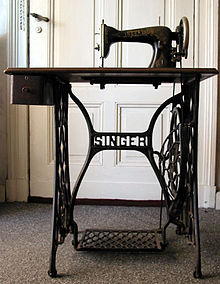 I talk a lot about food on this blog — and everywhere else, for that matter. As a dining writer, I’ve followed in the footsteps of the  grain traders, butchers, cafe owners, chocolatiers and other food-related business folks in my mother’s family… in my fashion.

And fashion is what I want to discuss now. I can’t claim to be nearly as savvy about another trade that I recently discovered was common to the Kornmehls, but when I was growing up, I knew my way around a sewing machine. Literally. My mother sewed, both for business and pleasure, and her machine took up a bit of space in our small quarters.  I had to be careful not to bump into it.

But seriously, although I wasn’t interested in partaking in the stitching tradition, I’m fascinated to find another professional thread running through the family (sorry; I can’t seem to help myself).

As I’ve mentioned before, Tarnow, Poland, was the ancestral town of my mother’s family, the Kornmehls. Many family members left Tarnow for other parts of the Austro-Hungarian empire; my great grandparents went to Vienna.

According to the YIVO Encylopedia of Jews in Eastern Europe, “Jews played a leading role in [Tarnow’s] clothing, ceramic, metal, and wood trades. They were also prominent in leather goods and fur, as well as in the production of hats, for which Tarnów was the leading center in Austria-Hungary.”

Frances Leder Kornmehl, whom I wrote about recently, had two brothers in the clothing trade,  Naftali and Moshe Leder. Naftali made caps from scraps he got from the clothing manufacturers, while Moshe owned a shirt business on Tarnow’s main street.

Although I already know that Tarnow’s Jewish population was decimated, every time I research the city for background to a post, I find something that makes me need to take a very long break. In this case it was a 1942 story: Nazi Military Officials Using 3,000 Jewish Tailors in Tarnow for Forced Labor.

Markus Kornmehl and the Quilts

But this next story, about another branch of the Kornmehl family from Tarnow that ended up in Vienna, is happier.

Actually, I mentioned him in passing as a relative of Lary Ecker and Eva Ryten, who wrote a guest post about 19 Berggasse, but only to note the family connection. I will be writing more about Markus as soon as I pin down additional details.

In the meantime, I can confirm that Markus was involved with stitching, though not clothing. He is listed in the Vienna phone book in the late 19th century — along with his brothers Simon and Pincus — as being in the quilt and mattress business.

His grandson Jeno Desser wrote about him in a family biography:

He was…technically gifted. At that time the foot-driven Singer sewing machines were widely distributed. He had tinkered with the machine in his head for so long that he was able to sew quilts–which until then had only been sewn by hand–with a machine, and had then sold his “discovery” to the Singer factory, which then brought out its own machines for making quilts.

There may be something lost in the translation from the German. Did Markus sell a patent to the Singer sewing machine company? Did they steal his ideas?  I’ve heard nothing about a family member being an heir to the Singer fortune.

Markus’ daughter, Anna Kornmehl Knopler, went into the quilt business too — though not officially. Her grandson, Lary Ecker writes, “I  remember as a small child in Tel Aviv in the 1950s that she sold feather-filled comforters that she made in the basement of the house.  It wasn’t a real business, but a side occupation and income.”

The stitching tradition was brought over to the United States from Vienna with two family members: Isaac Neugasser and my mother.

I talked a bit about Isaac recently: He married Helena Kornmehl, the aunt of Curt Allina (of Pez fame), and the two of them served as kind of a clearing ground for refugees from Europe, including Curt’s cousin — and my mother ‘s — Otto and Hetty Sternberg.

It turns out Isaac was a tailor. Perhaps that’s why the Neugassers were among the few relatives I recall my mother visiting in Brooklyn: They were not only landsmen (fellow Jews who come from the same town), but also in the same trade.

I’ve written about my mother’s being a seamstress and fur finisher, a carryover from her life in Vienna.  She practiced the profession for long enough — though I don’t know in what capacity — that she got a small pension for it (really, compensation for being forced to stop working and leave the country).

That came as a nice surprise to her, when she found out that she could wrest even a small sum of money from the hated Austrians who took everything. And it is  nice for me to know that my mother didn’t turn to sewing as a fallback to earn money in America but, rather, that she took up a prized — and as I now learn, traditional to the family — trade.