I like cemeteries, especially big sprawling ones with famous people buried in them. It’s always interesting to see different forms of remembrance and, for the most part, they are quiet, park-like places to stroll and contemplate mortality.

Not only is it one of the largest cemeteries in the world, and chock-a-block with celebrities–the musicians alone include Beethoven, Schubert, Brahms, Salieri, Johann Strauss II and Arnold Schoenberg; you can even download an audioguide on your phone rent an audio guide to this vast place–but I have relatives there to pay respects to. Family members who weren’t killed by Nazis but, rather, who experienced the natural cycle of life and death.

This would be a cemetery visit with a purpose.

First to Go AWOL: The Six (or Seven) Who Shared Their Eternal Rest 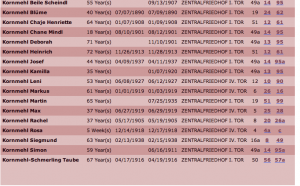 A bit of background. Zentralfriedhof has four main sections, two of them devoted to Jews. Many of the graves in Gate I, established in 1863, were destroyed by the Nazis during Kristallnacht, but many remain, including the large crypt of the Rothschild family. The second Jewish cemetery, built in 1917, is still in use today.

When I was planning my trip, I knew I wanted to visit my family’s graves, not difficult to locate online. The Jewish Welcome Service Vienna, who are helping me with the Jewish research portion of my trip, asked me to provide a list in advance so the guide could find them before I came.

The first bit of bad news: Walter, the historian who had been assigned to help me find the family, reported that the graves located in the oldest section, Gate I, were completely overgrown. He had searched for three hours and could not find any of my family’s resting places. This was not so much of a shock, given this section’s history, though I had hoped for better news.  I particularly wanted to find the group crypt, described in the post The Plot Thickens.

But never mind. There were several graves in the newer section that I wanted to visit, particularly the two belonging to my paternal grandparents, Ignatz and Mathilde Jarolim.

It may seem odd to hear me complaining about the temperatures in Vienna, but Austria is experiencing a heat wave. It’s been in the 90s for the last three days. It is hotter here than it is in Spain and Turkey. And while it may not be hotter than it currently is in Tucson, I don’t go traipsing around in midday there. I know better.

Here, if I want to go sightseeing, I have no choice but to brave the heat. And there is no air-conditioning in museums and on buses.

This complaint is by way of providing context. By the time Walter and I met to go on our visit to Section IV of Zentralfriedhof, it was 1:30pm and we had both been schlepping around for the previous several hours, he giving another tour, I visiting museums. We were both already hot and tired, and the trip out to the suburbs in the hot container that was our bus did nothing to provide a cooling respite.

But we were on a mission, with specific sites to find and a cemetery plan to follow.

We looked for Leni Kornmehl, though I wasn’t entirely sure who she was.

We looked for Ignatz and Mathilde Jarolim, my paternal grandparents.

The rows weren’t clearly marked. Shade? There was none where we were looking.

It was hot. As we traipsed through the grass, my ankles were getting bitten by bugs — specifically, I was certain, ticks. I could feel the Lyme Disease setting in.

Seeing a deer–charming but notoriously tick carrying–didn’t help assuage my fears. There were many of them around the cemetery, Walter said. I was reminded of the bedtime story my mother used to read me by an Austrian author, Felix Salton: Bambi. Am I imagining that she read it to me in German? I know I cried when Bambi’s mother, Felice, died.

But there was no time for ruminations in this cemetery. We had one more grave to look for–and it was, theoretically, in the direction where we’d spotted the deer. 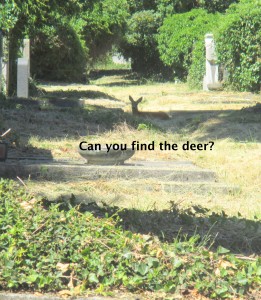 The deer skittered off as we approached. And suddenly… there it was…. a relative’s grave!

It was Siegmund Kornmehl — specifically, OSK, or the Other Siegmund Kornmehl. Not Freud’s Butcher, who has the same name, but the one who was married to Anna Kornmehl, one of my mother’s aunts. The one who owned the Cafe Victoria.

It was too hot and we were both too tired to go on and visit any famous strangers, but the visit hadn’t been in vain.

And here’s the odd part. Not only was Siegmund Kornmehl’s the final grave on the family list to look for before we gave up, but Walter and I both agreed that the deer had been sitting at its foot. Felix Salten’s real name, as it happens, was Siegmund Salzmann. Coincidence? Perhaps. But I like to think that the deer was a spirit guide.

One, I hope, that wasn’t bearing ticks.